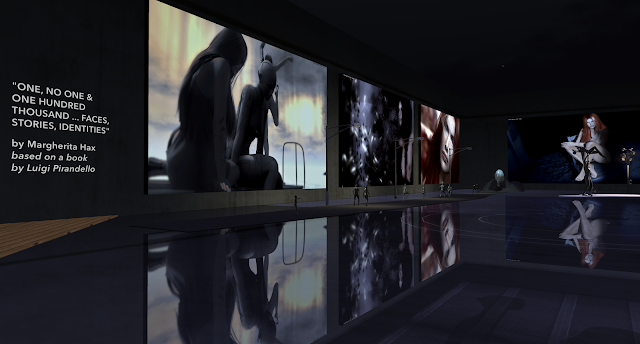 VIRTUAL IDENTITY by Margherita Hax is the December 2021 exhibition @ Nitroglobus.

I am very happy to exhibit at Nitroglobus the images of this classy arty lady, who is exhibiting her works for the first time in an SL gallery. She already gained glory and followers with her Flickr account, but placing her works on the walls of a 'real' SL gallery and see people looking at it, is something completely different.

Meet Magherita (Marghe on short), who made 13 very personal new works for this exhibition, which all show some part of her SL body and her RL soul: VIRTUAL IDENTITY.
Over the years Marghe experimented in many roles and jobs which all represented a part of her, especially her creativity. She was for instance a model, an event host, a producer and director of shows and a theatrical actress. In short she always was looking for both an aesthetic and an artistic dimension.
She had fun, she got excited, she fell in love, she suffered from the limits of virtuality and moreover, she was also afraid of no limits. 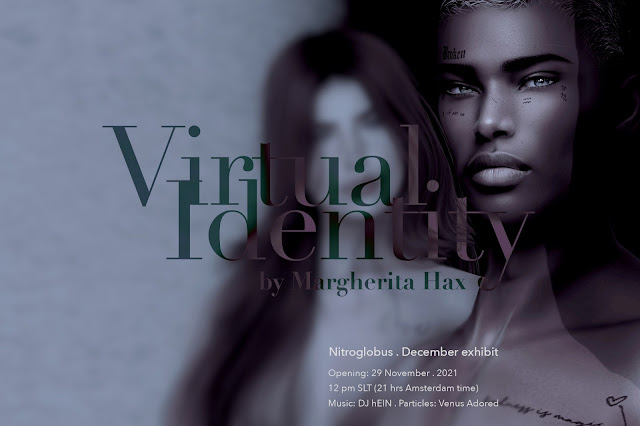 The exquisite poster for the exhibition was made by David Silence
based on an image of Marghe.
****
Margherita explains:

The title of this collection of images exhibited at Nitroglobus is inspired by the paradox which Second Life initiates between the identity hidden behind the monitor and the one revealed by the avatar, the messenger of the human being controlling the avatar. 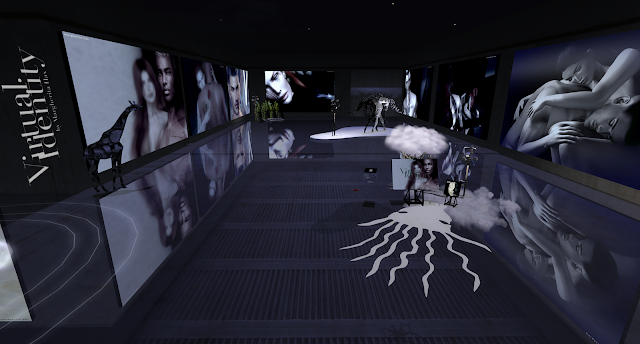 I have always felt the fascination of this paradoxical combination of emotions which, although limited and contained by an important filter in one sense, flow even stronger into the other. Thus, suspended from judging what is true or fake, in my photos, through portraits, gazes, stories and attitudes, I try to show and narrate emotions, lifestyle, relationships and (why not) love in 3D, where even the Myths (Athena, Eros and Narcissus) are present,

image by Inara Pey
Inara Pey wrote a truly awesome article  'Art and Virtual Identity in Second Life' in her blog 'Living in a Modemworld'
'Remarkable in its power, this is an exhibition that offers multiple opportunities for discussion, there is simply so much wrapped within the images and the themes. As individual pieces, the images at Nitroglobus are all inspiring in their presentation and depth; by using the west-east arm of the gallery to focus on a core story of love (and regret), and the north-south arm for more “individual” pieces that can also help to underline the motifs and emotions of the other arm, Margherita offers an exhibition of two intertwined halves that might be said to present a metaphor that again underlines her idea of paradox.'
BUT Inara also wrote this about me and wow I am so very proud, my cheeks are glowing 😀
'As this is the end of the year, and – as I’ve noted – another superb series of exhibitions at Nitroglobus, I’d like to close with a personal note with regards to Dido herself. Her approach to the exhibitions she hosts – invitation, collaboration, encouragement, the use of additional 3D to offer contrast or emphasis, her sheer enthusiasm for art, makes any visit to Nitroglobus a consistent delight and an absolute pleasure to write about in these pages.' 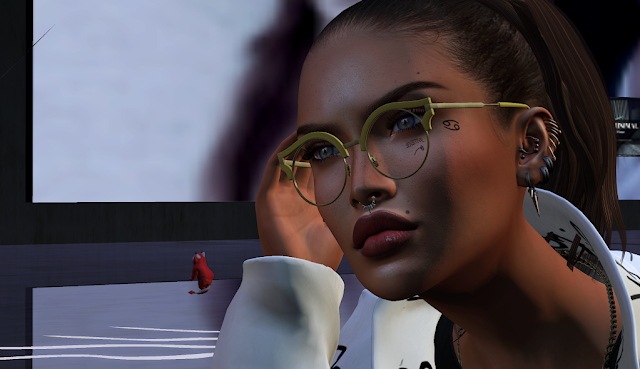 image by Frank Atisso
Frank Atisso was the first to write a great review 'Virtual Identity : Margherita’s Fascinating Display at Nitroglobus' in his Blog & Gallery ART KORNER about Marghe's exhibition. Frank interviewed Marghe in the gallery and made the above image during that interview.
'As we sit down for a chat, Margherita tells me that she has always been curious about the possibilities that the virtual world offers to those who live in it. In a virtual world like Second Life, the possibilities are endless and a person can freely take on the identity they want to live. This world can be freeing in some ways as a person can rise above social stigma, peer pressure or any kind of traditional restrictions and live the life they want.
In this virtual world, one can make friends, have relationships and even create a mini-universe of their own within. However, with this liberty also comes the danger of false projections. In “Virtual Identity“, Margherita highlights this danger through a series of seven images which form a simple story of heartbreak, which most of us have lived through at some point. The L-shaped structure of the main hall of the Nitroglobus Gallery offered her a great opportunity to create this story through seven images which can be found in the arm extending eastwards.'
---
Diomita Maurer published an article about Margherita's exhibition on 6 December in Diomita and Jenny Maurer’s Blog
'As I know already from my many visits to the Nitroglobus Roof Gallery the showcased picture are presented very well by the mirroring effect of the floor. As the name of the exhibition implies, the pictures deal with the virtual identity we give our avatar in Second Life. Although the mind and soul remains in the physical world, we try to express ourselves in our avatar – and usually we follow the dream of perfect beauty and perfectionism.'
My sincere thanks to all the reviewers!
**** 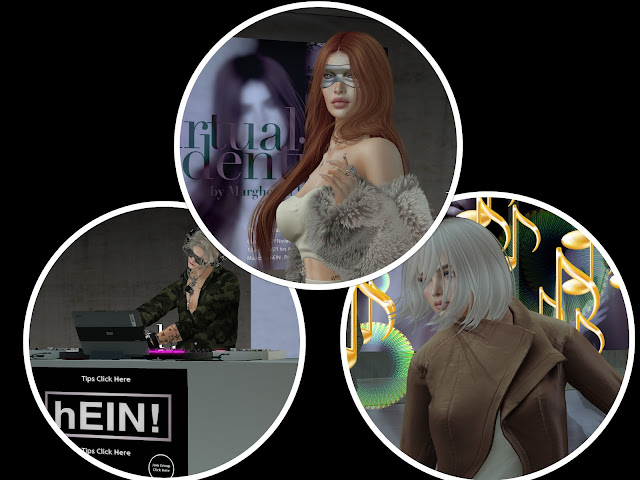 main players at the opening party
The opening party for the exhibition took place on Monday, 29 November and was super cool with tunes by DJ hEIN and accompanying particles by Venus Adored.
Many visited and an overload of images was made by many visitors as well as by me. I will show you a few here: 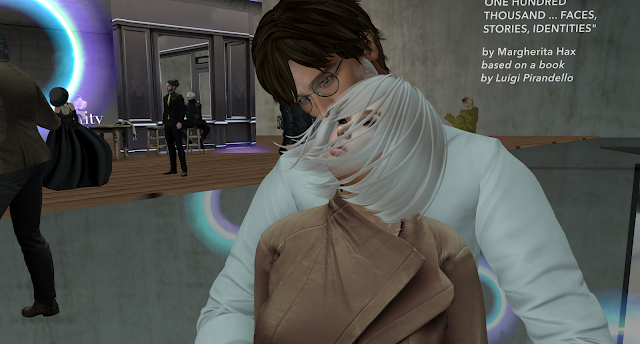 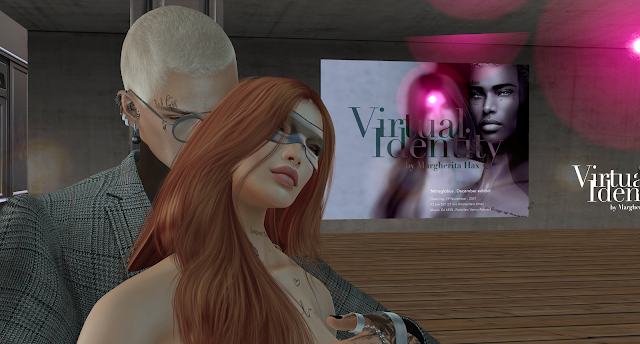 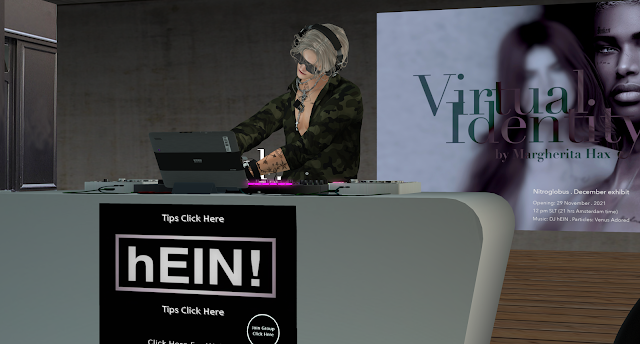 the one and only hEIN 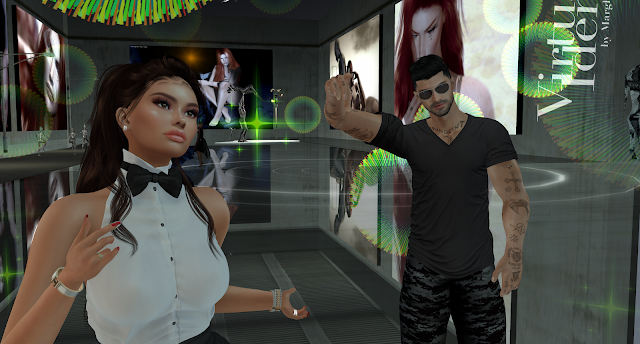 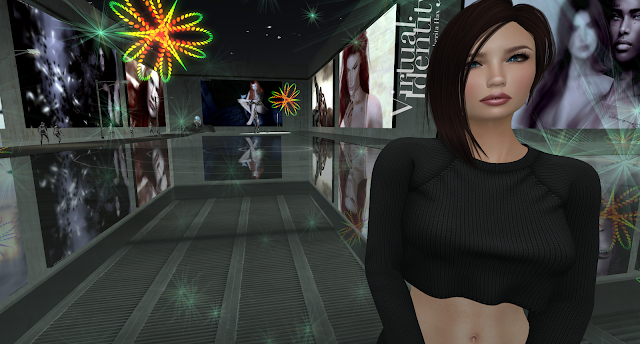 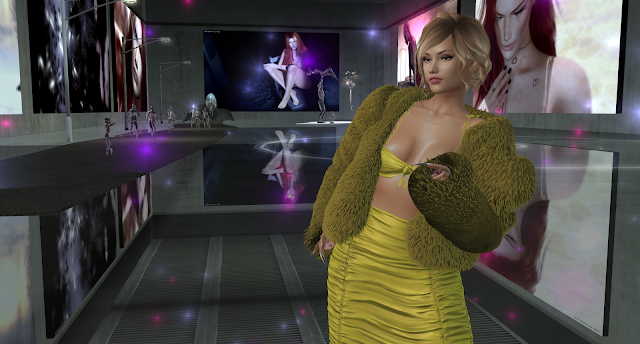 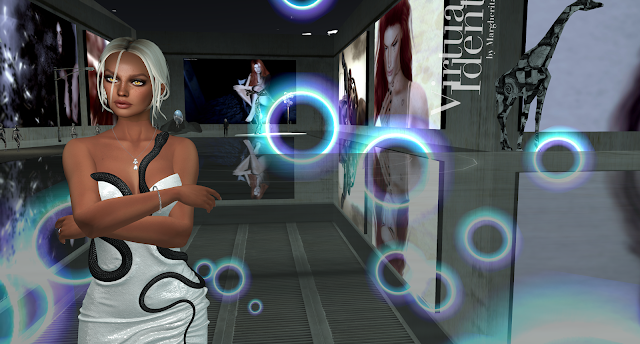 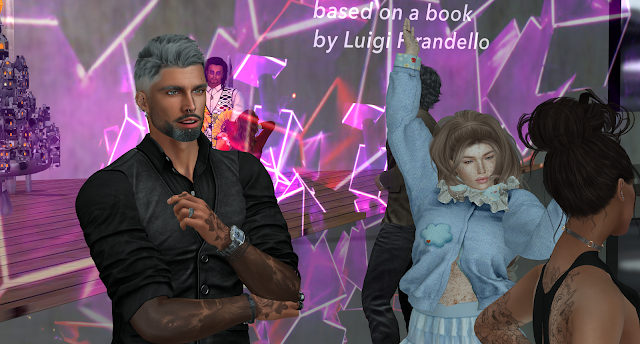 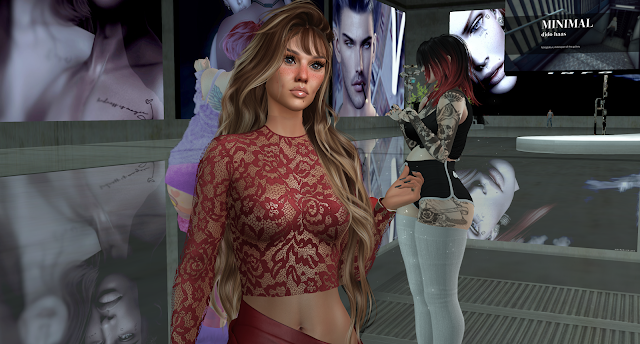 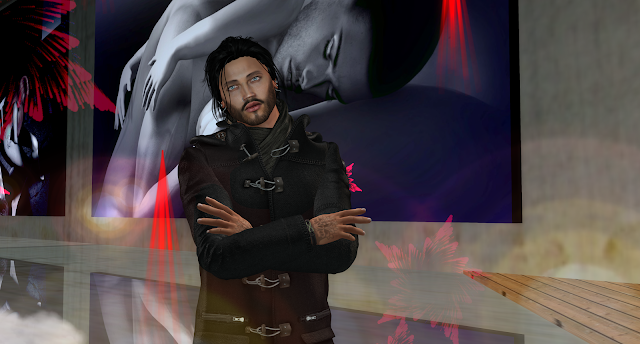 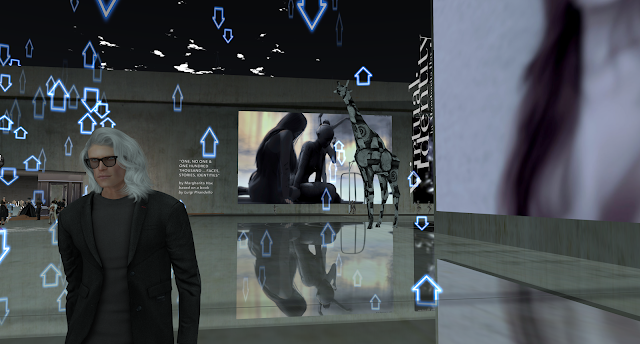 ***
The following images were made by Mihailsk, who is a far better photographer than I am: 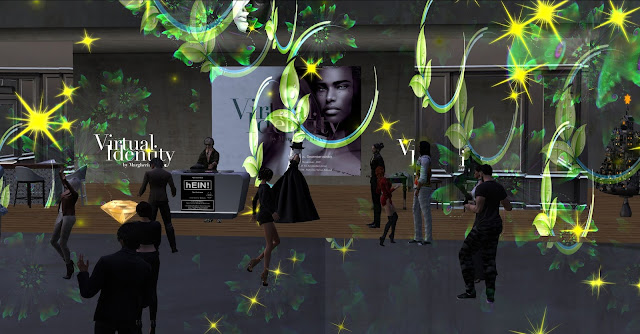 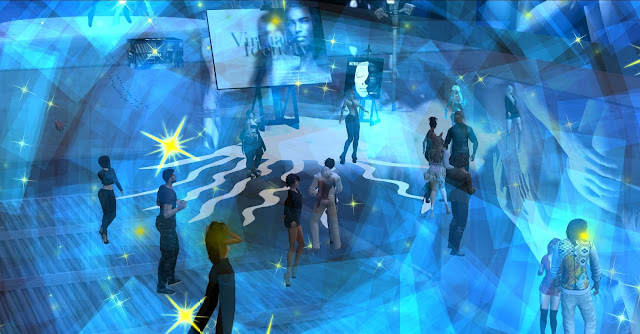 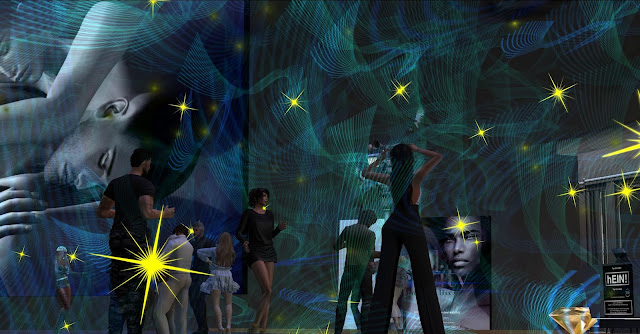 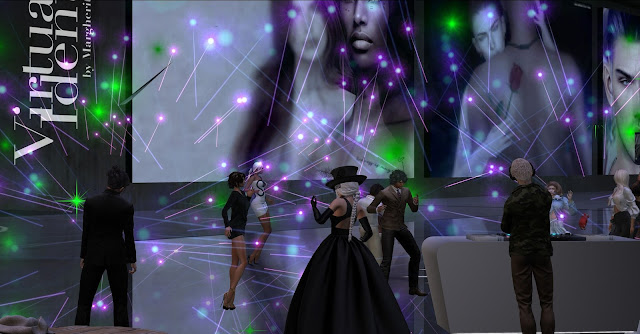 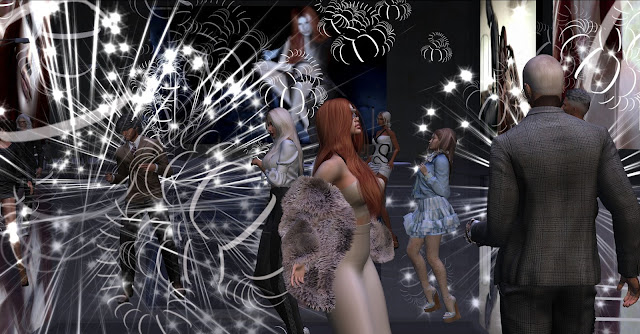 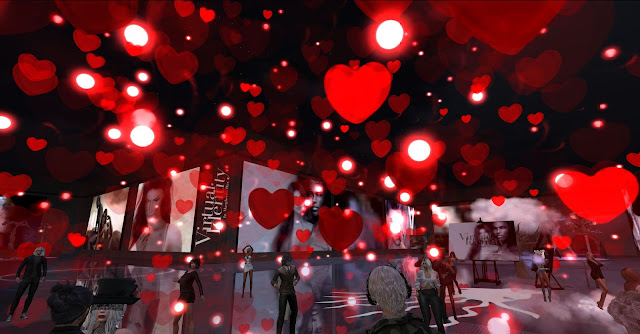 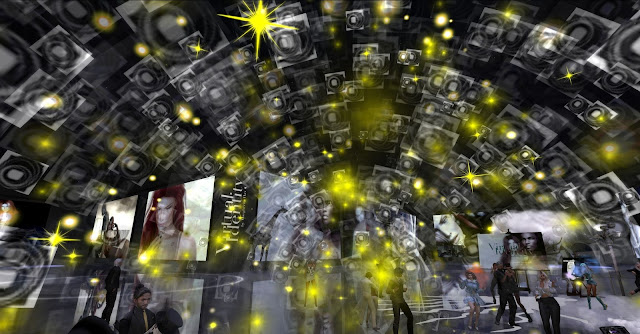 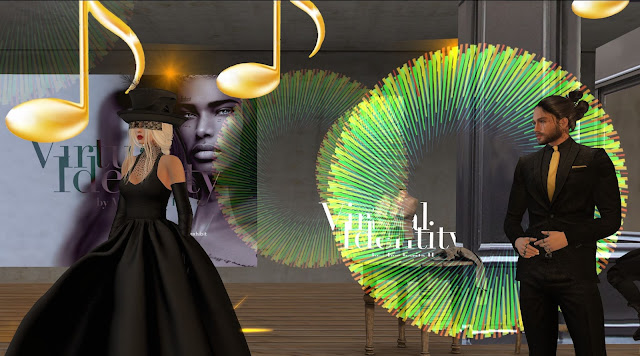 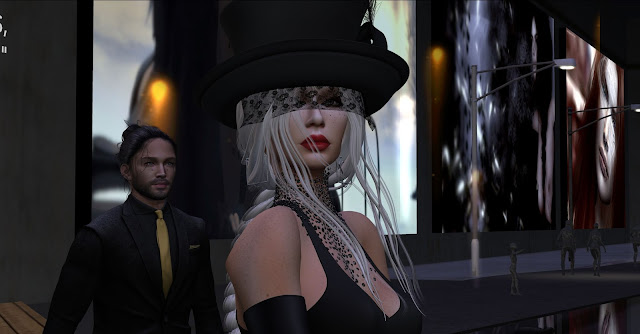 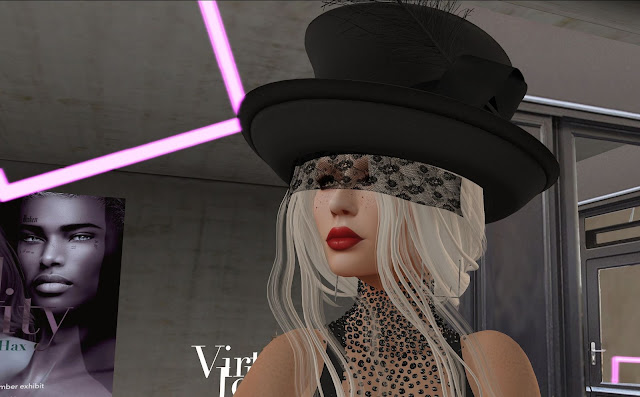