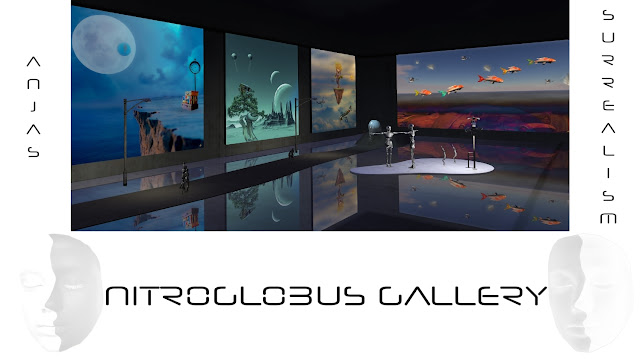 Presenting an overview of all the reviews, articles in magazines and blogs as well as a short video which were published about the June 2021 exhibition 'Anja's Surrealism' by Anja Neobookie @ Nitroglobus.

First article that was published was Inara Pey's review in her blog Living in a Modem World, in which she gave a thorough analysis of the Anja's images

'On display is the most stunning display of surrealist art it has been my pleasure to witness, one that fully embraces the core principals of the movement whilst encompassing broader photographic and artistic techniques and commentary.

Through her work, Anja is able to touch on subjects in her images in a way that is entirely non-directive. Take Free Willy, Survivors, and Wrong Shipping for example, with their subtle suggestions of our relationship with the world around us.
Elsewhere might be found commentary on the human condition – life and relationships – and an embracing of technique such as fata morgana and chiaroscuro that is simply captivating...... '

image by Inara Pey
***
At the same day I published in my blog 'Exploring SL with Dido' the official poster as well as all the necessary information about the exhibition an the artist. Information which is also to be found at entrance point in the gallery. 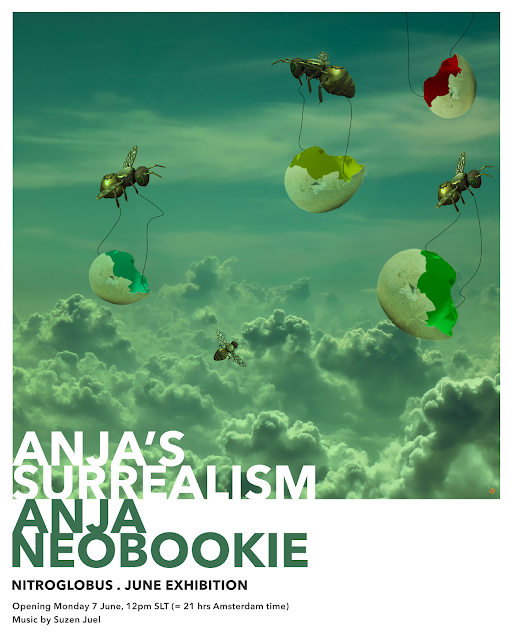 awesome poster made by David Silence, based on an image of Anja
*** 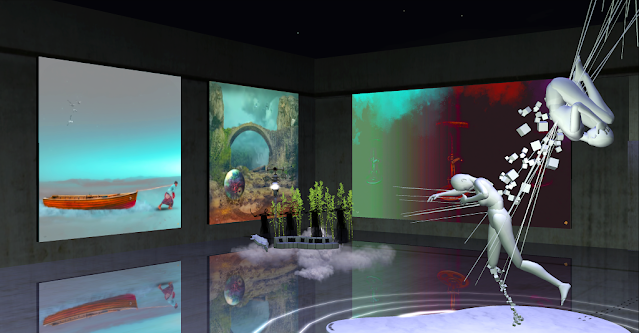 On 11th June another awesome article was published by Frank Atisso in Art Korner in which he too analyzed Anja's work in depth.
'The vibrant colors and a touch of magic that Anja applies in her works are what appeal to the viewer in this stunning exhibition at the Nitroglobus Roof Gallery.
Anja associates a story with each work she creates. For example, “They all left the playfield” is a personal work which Anja developed to project her thoughts on canvas about the slightly negative political situation at the place where she stays in RL. Her story, thoughts and feelings might be different from the one you develop in your mind as you look at each artwork. But then isn’t this the beauty of art? The fact that each viewer is able to associate Anja’s artwork with situations in his or her life and can derive meaningful analogies so varied and different from each other.'
*** 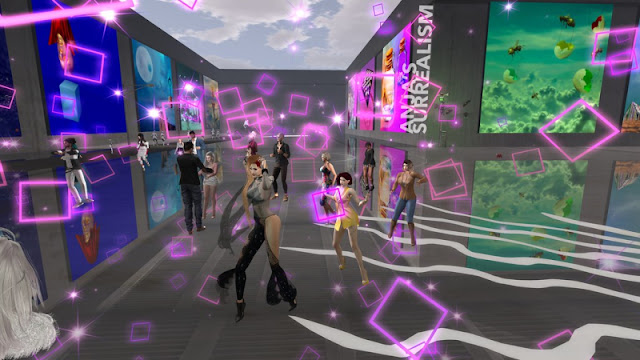 image made by Fenella Allen when she visited the opening party
Fenella Allen wrote in Edition 22 of Limoncello News in the column 'Elsewhere on the Arty Grid' the following:
'Inside Anja's mind is a fascinating, imaginative place and she's adept at sharing it through her art. She has been working on this show for a long time. Fenella has had secret previews of the work in progress and has been bursting with pride at her friend's achievements and struggling not to blurt out the secret. She is delighted finally to be able to say; "I love Anja and I love her art. It's a great show. Go! Go now!!"
*** 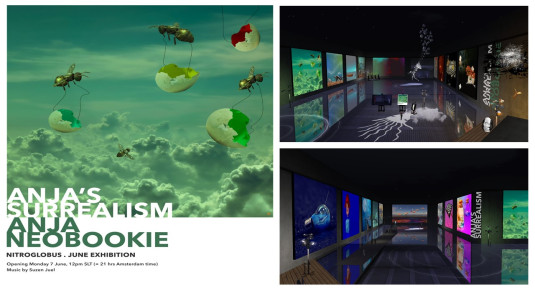 image by Diomita
On 13th June, Diomita of Diomita and Jenny Maurer’s Blog wrote a cool post about Anja's exhibition. Diomita wrote:
'Like myself Anja is an explorer. She’s amazed and surprised by the beauty of the sims, islands, buildings, objects, nature and landscapes in Second Life, she’s excited about the creativity of the people that make Second Life. Her pictures are not necessarily connected to Second Life. There are elements that you might have seen in Second Life before before but there’re put together in a different way. These objects might initiate a memory of what you experienced in Second Life or in Real Life, might create an idea, a thought, a snippet of a picture. That’s all in the eyes of the spectator.'
*** On pages 128-149 you will find an interview with Anja Neobookie about her June exhibition 'Anja's Surrealism' at Nitroglobus, written by Frank Atisso in this professional glossy Second Life magazine '360 Gradi'of editor Oema Resident:
'An emerging sensation in the art world of SL speaks about her remarkable journey, creating her own brand of surrealism and her latest exhibition at the Nitroglobus Gallery.'
Posted by Dido Haas at 22:30