TOUGH MAN in the PRESS 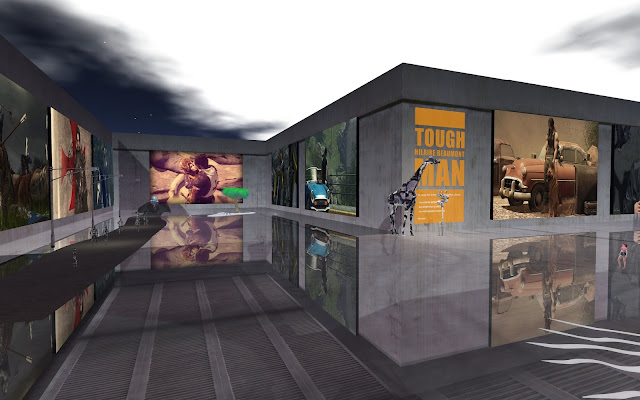 image by Fenella Allen
Fenella Allen wrote an interesting analysis in her latest Limoncello News (edition 31) about the present exhibition TOUGH MAN by Hilaire Beaumont @ Nitroglobus. I quote here somes lines, although I recommend to read the entire article.
'The images on show are well-composed, strongly executed and grab the viewer's attention. They focus eyes and minds on Hemingwayesque subjects. So feminised is post-modern Western Culture that "male" and "bad" are often – let's be honest – confused. When did you last see the noun "masculinity" without the adjective "toxic", for example? Men like those in Hilaire's images only feature in plays, movies, art or even advertising as threats – as "bad guys". And even though they're often just like our beloved dads or brothers, we don't seem to question that much.
So maybe a surprised reaction is necessary and overdue? Don't misunderstand us. We're not saying the exhibition was meant (or that we see it) as a lecture, sermon or battle cry. Just that, perhaps, the very notion of manhood needs a fresh look?'....................................' 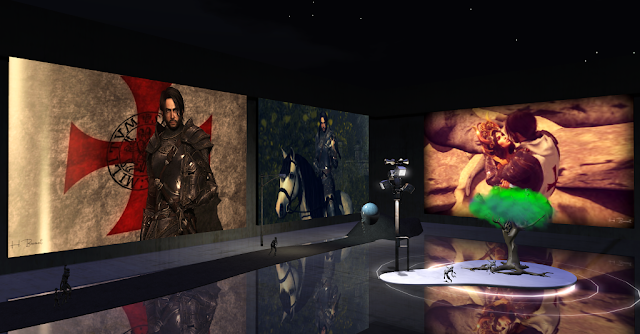 image by Frank Atisso
ART KORNER published an article about Hilaire's exhibition TOUGH MAN on 12 August.
Although I copied part of the article here, I strongly recommend to read the entire article!

'The men in Hilaire’s images may appear strong and invincible at first glance but when you look deeper there are layers to each image which you will uncover. Beneath the steely exterior of these tough men, there is an ocean of emotions… and that is the true beauty of Hilaire’s work. He manages to bring out the subtle hints of emotion which pierce through this mask of toughness worn by these men.
“Act tough and hide your weakness” – a rigid social construct that has been subconsciously imbued in the minds of most men leaves many feeling trapped all over the world. The pressure of presenting a tough exterior is immense and can have devastating effects on the health and well being of men who have been forced by the society to bury their emotions.....................'
****

image made by Inara
Because I went on a short RL holiday on 12 August I totally missed Inara Pey's thorough analysis of Hilaire's exhibition 'The vunerability of a tough man', which she posted that same day in her blog 'Living in a Modem World.' Love this review a lot.
'Hilaire is well-know for his avatar studies, although he does not tend to exhibit that often in-world – something that makes Tough Man even more appealing. He also does not regard himself as an artist – a point I would dispute, because his works contain all the richness to be found in any true work of art, not just from a technical perspective: framing, lighting, colour, etc., but because of the sheer depth of story each and every image carries with it, together with the richness of life, vitality and emotion each conveys.

This is doubtless in part because of his background in role-play in Second Life. Creating and inhabiting a character is very much an artform it itself; bringing that character to life such that they can be believed and interacted with requires a strength of imagination and willingness to emote and remain in character. Coming from that background gives Hilaire, I would suggest, a deeper connection with his characters, and this is evidenced in the twelve images presented in this selection........'
***** 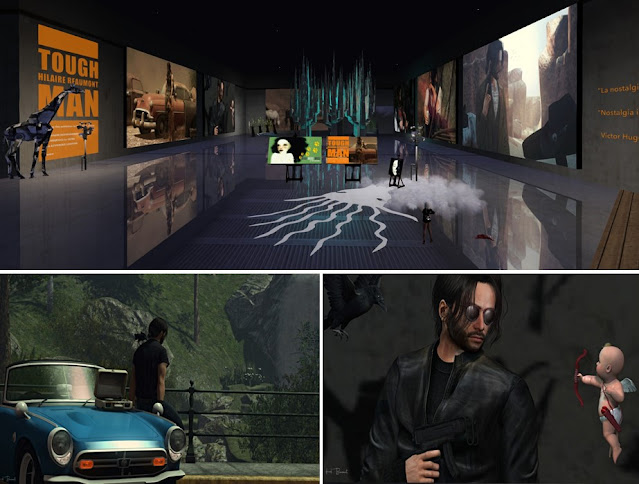 image by Diomita Maurer
Today, 20 August, another interesting review was published by Diomita Maurer in her blog 'Diomita and Jenny Maurer’s Blog' of the present exhibition @ Nitroglobus by Hilaire Beaumont.
Thanks so much Diomita, appreciate a lot!
'The exhibtion consits of 13 pictures. And at this gallery the pictures can develop strength as they are mirrored on the floor. What are the pictures about? Not surprise, they all show a tough man as the main object. Hilaire shows his avatar as a fighter, as a soldier in varoius epochs, as strong tough man. Other pictures are in our epoch and just show the tough man, not a soldier or fighter.
But there’s also some wit: one picture shows him wearing a gun pointing at a little angel with a bow. Hilaire also shows the other, softer side. The side that a tough man tries to hide as it doesn’t fit to the cliché: playing a violin, or listening music while looking out into the nature, lost in thoughts.
'Tough man' by Hilaire Beaumont is the kind of exhibtion you rarely see in Second Life. The pictures are impressive and thoughtfully made and selected. Thank you for your art, Hilaire.'

*****
Interesting to read these different analyses by Fenella, Frank, Inara and Diomita of the August exhibition @ Nitroglobus.
Want to see for yourself? Here's your taxi to the gallery.
Posted by Dido Haas at 21:30