Red Sky by Mihailsk @ Nitroglobus (dido's part of the gallery) 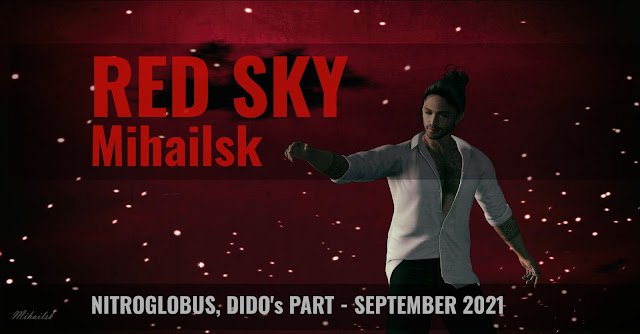 RED SKY by Mihailsk, the September exhibition @ Nitroglobus (dido's part of the gallery)
September 2021: he's back with 8 great works, which  this time are situated at dido's part of Nitroglobus  I am sincerely happy Miha said yes when I asked him to fill 'my part' of the gallery.
As all Miha's works exhibited have in common they are situated under a red sky, I 'dressed' the gallery hall likewise with red light poles, one throwing it's red light on Nitro's sculpture 'HIGH 'EMOTIONS and ..., moreover,  red/purple cloud trees with ditto growing clouds under the floor, which Venus Adored made especially for me  (//me blows a kiss to Venus whispering 'thank you')

RED SKY:
The color red symbolizes intense situations and emotions but at the same time it indicates warning and danger.
My red sky is a sky which reflects strong human emotions, covering them like a blanket and thus giving a sense of safety and hope.
Danger, longing, visualization, power, love, pain, balance, joy.: eight human moments under the red sky.
I am honored to present these new works here at Nitroglobus. 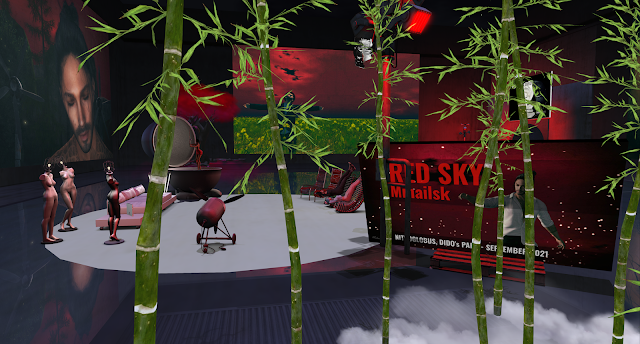 An article was published in Art Korner: 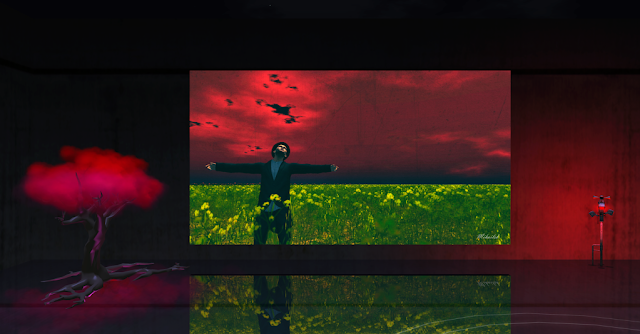 image by Frank Atisso
Frank Atisso wrote: 'With the help of strong photographic techniques, Mihailsk depicts eight extremely human moments – danger, longing, visualization, power, love, pain, balance and joy – under a sky washed in red (almost crimson) color through his images. However, it is important to note that the “red sky” that is highlighted in the title merely acts as an element of support and has been used to enhance images which are already rich in meaning and driven by highly effective composition and lighting.

'Colour is oft used to define or evoke emotions and emotional responses; we talk in terms of someone “seeing red” when exceptionally angry, or of having a “black mood” or being caught in “the blues”; we believe muted tones and colours help evoke feelings of calmness or help people to relax, and so on. Red is especially evocative, as it generates so many responses / emotions / feelings. As noted here, it is often used to represent the stronger emotions of anger and rage, but at the same time it can also express the more tender – love, compassion, care; it can also express danger, the need to be careful or to keep away and, conversely it can emphasise attractiveness and wanting to attract through its use in the clothes we wear.' 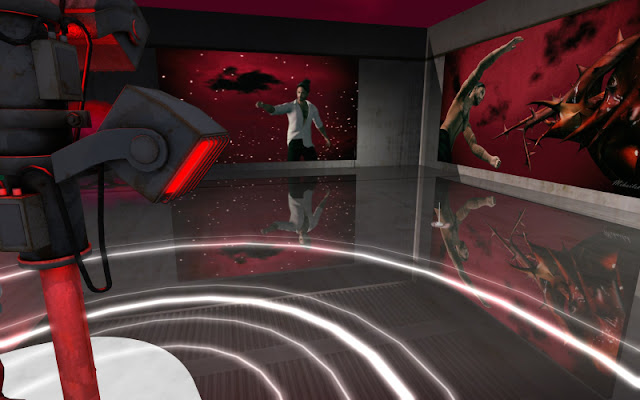 image by Fenella
'here are two new exhibitions at the Nitroglobus for September. The first is Red Sky by Mihailsk in Dido's part of the gallery.

This is Mihailk's second exhibition in rapid succession. His debut exhibition, Baptism of Fire, was also at Nitroglobus and we reviewed it in Edition 26.

Dido has dressed the space with red light poles, red/purple trees and glowing clouds under the floor. The staging sets the artworks off perfectly. 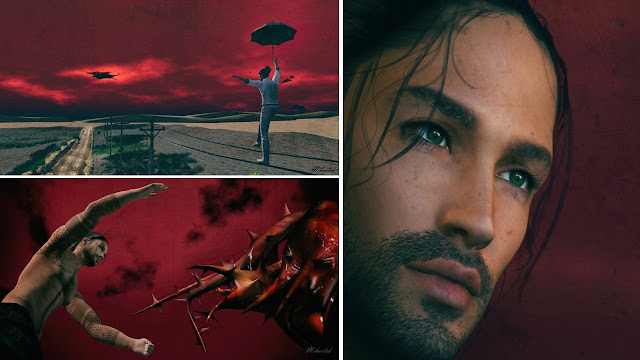 “Red Sky” consists of 8 pictures. These 8 pictures have in common that they are situated under a red sky. Dido prepared the exhibtion space to enhance the red sky with red light poles and a sculpture from Nitro named “High Emotions” and with a few red/purple trees, that were made by Venus Adored just for Dido.
Posted by Dido Haas at 23:07